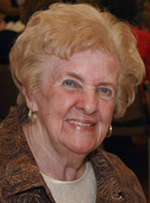 Virginia received a Centennial Award from AOL in 1974 for her work as an educator. She was president of Richard J. Daley City College from 1971 to 1978.

Molnar, Jean Malooly, sister of the late Mary Janet Malooly McKeon ’44 and sister-in-law of the late Marilynn Ryan Malooly ’53. Jean served as first vice-president of the AOL Alumnae Board in the late 1950s. 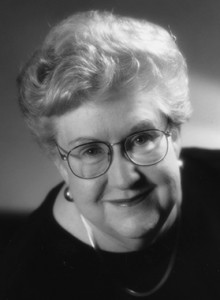 Huguelet, Mary Kay Mulligan, sister of the late Charlotte Mulligan Stitzer ’58. Kay was a past president of the AOL Alumnae Association.

Karyn Kennealy Chermel, M.D. ’63, who spent much of her life aiding patients in war-torn and impoverished areas of the world, died last December at 64. She passed away in her La Grange, IL, home due to complications from several strokes she suffered a few years ago.

Dr. Chermel’s obituary in the Chicago Tribune stated that as a physician with Doctors Without
Borders, she shared in the aid group’s 1999 Nobel Peace Prize for its work in Bosnia.

The physician’s twin, Sharon Kennealy Carey, told the Tribune: “Her work took her to places where there was no food, no heat, no sanitation. But she loved helping people and she was good at it.”

In addition to her sister, Dr. Chermel is survived by a son, Dan; two daughters, Lisa and Kerry; her mother, Mary, and two grandchildren.

Lawson, Sharon Brown, sister of the late Donna Brown Harris ’72 and the late Elaine Brown ’78. Sharon was a longtime Alumnae Board member, and she served on the “Miracle on 95th Street” fundraiser committee in 1997.

Dore, Kathleen O’Connell, who played the role of Helen Keller in “The Miracle Worker” at A.O.L. Lifelong friend of Pat Reuther Ambriz ’69

Johnson, David, husband of Bonnye Austin Johnson ’72. Mr. Johnson served  from 1983 to 1995 as the first African-American mayor of Harvey, IL. A college-level educator for many years, he also was a South Suburban newspaper columnist and a consultant to area municipalities at different times.

Driehaus, Richard, brother of Dorothy Driehaus Mellin ’61 and Elizabeth Driehaus ’64. The renowned self-made businessman and philanthropist was a graduate of St. Margaret of Scotland School. The School Sisters of Notre Dame gratefully recall his donation of a million dollars to the order in the 1990s.

O’Donnell, Mary A., mother of the late Bonnie O’Donnell Horan ’65 and sister of Joanne McCarthy Mathieu ’56

Geraldine Zielinski and her twin brother were born in Chicago on December 13, 1929. She was the daughter of Julius Zielinski and Sophia Firling Zielinski, both Chicagoans. She had five brothers and three sisters. She was baptized three days after her birth, at St. Stanislaus Kostka Church, the Polish “mother church” of Chicago.

In her autobiography, Sister Mary John wrote, “My mother and father were faithful to their religion and taught us to be likewise. Because my parents were of Polish descent, we said our prayers in Polish.” Sadly, her father died when she was only eleven years old, but her mother “was faithful in seeing that we went to the sacraments weekly. I thank God for giving a mother to me who saw to our welfare spiritually as well as physically.”

Geraldine entered the School Sisters of Notre Dame at the Milwaukee Motherhouse in 1949. She was received on July 17, 1951, receiving the name Sister Mary John. She was professed on July 18, 1952, and took her final vows on the same date, six years later. She had come to the community with a “feel” for tools, having worked in a Chicago hardware store, and “when she decided to accept a religious life, she set only one condition—that she be permitted to bring her carpentry tools with her when she took the veil.”

From the year of her first profession in 1952 until her retirement in 2003, Sister Mary John was always available when needed. Her first five years of service were in the Milwaukee Motherhouse printing room. Next, she served a year as cook and refectorian at St. Mary in Prairie du Chien, Wisconsin. When the Milwaukee motherhouse moved to Notre Dame of the Lake in Mequon, Wisconsin in 1958, Sister Mary John was there, as engineer for Notre Dame of the Lake from 1958-1982 and continued on when the buildings were sold to Concordia College for another year.

In the Spring 1965 issue of the “School Sister” magazine, Sister Mary John was featured in the article “Our Johnny-on-the-Spot,” by Sister Mary Blaise. By then, Sister Mary John had become a licensed engineer and headed a crew of four men, also engineers. “Together they man the eight-hour shifts, and manage the sprawling plant that includes not only heating and an independent water and sewage system, but extensive refrigeration units, a closed circuit telephone and public address system, and countless electrical and plumbing appliances that must be kept in working order.”

Sister Mary John was famous in the Mequon motherhouse for being always on-call, always ready to help with any need, large or small. As Sister Mary Blaise wrote, “If she is out on a job, the public address system calls her and –funny thing!—even when it says Sister Mary John! Urgent!” no one gets very alarmed. The house feels secure. Everyone seems to take for granted that all things will be restored to order by Sister’s quiet and unassuming competence, even if she has to design a repair part to do the job.”

How did she do it? She knew how to economize on time, and solved the problem presented by distances on the 120-acre campus by riding a bicycle through the basement tunnels or driving a jeep around the grounds. For thirteen of the twenty-three years she served at Notre Dame of the Lake, Mequon, she was assisted by Sister Judith Schuck; both were licensed high pressure boiler operators and continually updated their knowledge, especially in energy conservation, by attending workshops and seminars.

In 1984, Sister Mary John moved to the Academy of Our Lady in Chicago, where she served as maintenance supervisor and consultant for the entire plant there. When the school was sold to the International Charter School—Longwood Campus in 1999, she continued on their staff until she retired in 2003. In 2005, she moved to Marian Village in Homer Glen, Illinois, and in 2008 to Resurrection Life Center, in Chicago, where she resided until her death on November 29, 2020.

Upon notification of her death, many Sisters and former Sisters had many memories to share of her kind and faithful service, wherever she was. One story that was recalled was an experience in which a muskrat escaped from the pond at Mequon and entered the priests’ quarters. She was urgently paged yet again and found the two men standing on tables in their library. She had brought along her BB gun, and quickly dispatched the muskrat.

Sister Carol Brunner, advocate for our Sisters at Resurrection Life Center, cared for Sister Mary John for the twelve years she resided there. She recalled her fond memory of looking out of the Novitiate window at Mequon and seeing Sister Mary John, Sister Judith and their dog Sparky in the open garage. As Carol put it, “I think Mary John, in her humble manner, influenced and touched more SSNDs in the former Milwaukee and former Chicago Provinces than anyone else!”

Sister Mary John is survived by many nieces and nephews and remembered fondly by the many Sisters who shared life with her at Mequon and at the Academy of Our Lady, especially.

The burial service for Sister Mary John Zielinski was held on Saturday, December 5 at 10:30 am at Holy Sepulchre Cemetery, Alsip, IL. Due to the State of Illinois COVID protocols, only 10 people were able to attend the service. Others who wished to unite in prayer with those gathered at the
cemetery, were invited to use the service in the Let us Pray section of our province intranet.

There will be a Memorial Mass for Mary John at a later date. May she rest in peace.